In 2014 Nicholas Kariniemi wrote a series of articles on Clojure start-up and bootstrapping latency with a particular focus on Android. This article is my own investigation into Clojure start-up time on the desktop. Clojure as a language isn’t slow once it’s up and running but that start-up time has resulted in a handful of band-aids over what I consider to be a root-cause of slow start-up time. A lot of research has been carried out by Alex Miller and others at Cognitect on how to improve start-up time. The reality is for most people in the Clojure community its relative impact, the available workarounds, and potential for regression doesn’t justify investing serious engineering effort. There are a few areas where I think Clojure would benefit from faster start-up;

In this article I’ll cover Clojure start-up time as demonstrated by the command below on the tracing branch in my fork of the Clojure repo.

This command is a small Clojure app that prints “hello” and will output a trace log.

I will walk through Clojure start-up breaking it down into the following sections;

The following trace graph will be used as a visual aid.

The first thing to callout is that because I’ve instrumented Keyword.intern, Var.intern, and Symbol.intern it has impacted the total run time adding about 70ms (7.5%). As a result the numbers throughout are meant to be used as proportional rather than absolute measures. The ideal start-up would have as few gaps on the above graph as possible and more work being done with-in a given slot of time. 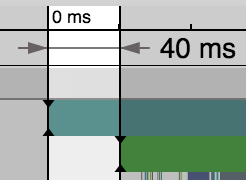 JVM start-up is a fixed cost of around 40ms on my machine as illustrated above.

During those first 40ms (4.2%) the JVM is initialised, and bootclasspath and extensions are loaded. It is therefore impossible for Clojure to load any faster than this and is probably wishful thinking to have it load in anything less than a multiple of this. 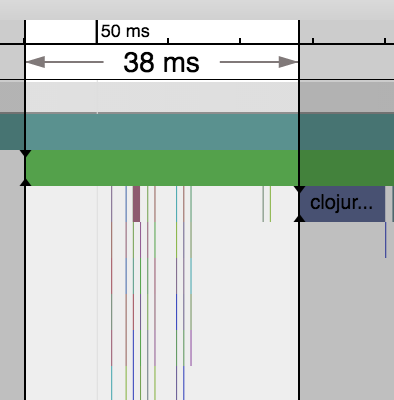 The next bit is loading clojure.main/main which is located in src/jvm/clojure/main.java. This is the clojure.main referenced from our command-line argument. It is a simple static Java main method that has the following code associated with it;

Behind those 5 lines is packed the whole of the Clojure run-time environment. In the standard Clojure jar the vars and symbols are static fields in the main class. This results in RT and clojure.core being initialised prior to clojure.main/main being called. For illustration purposes I’ve inlined the fields into the main method as outlined above. This allows me to reduce the queue size to 256 entries for my tracer and helps to highlight performance gaps on the graph.

One of the things you’ll quickly notice is the 38ms (4.0%) gap between the start of clojure.main/main and the execution of the clojure.RT static block. The first 12ms (1.3%) of empty whitespace is class loading at which point a small flurry of about 100 clojure.lang.Symbols, Vars, and Keywords are created as highlighted above until *out* is loaded 38ms (4.0%) later. 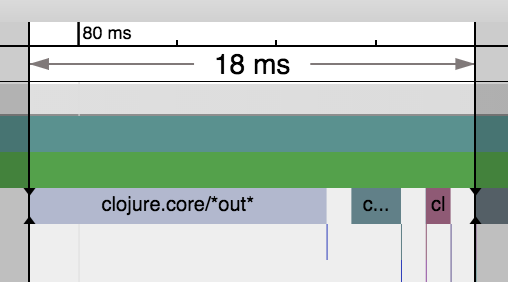 Clojure *out* in purple takes another 12ms (1.3%) and its symbol is the thin green line 4ms (0.4%) earlier in the graph above. A large amount of this time is associated with updating the Var root , the CAS operations used to add the Var, and adding the Var to the ns map. I have some concerns that an AtomicStampedReference isn’t used here because of the ABA problem. I doubt it’s much of an issue in practise because of the largely serial nature of namespace initialisation and the employment of Var.rev. There’s an issue with syncronisation in the constructor that I plan to submit a patch for.

Why fuss over 18ms (1.9%)? The optimisation of start-up is unlikely to be achieved from a single silver bullet. Instead it will be the accumulation of many small optimisations. This is also a good spot to test optimisations prior to modifying how Clojure classes are generated.

Between the start of clojure.main/main and what I’m calling clojure.RT static in RT.java is the initialisation of a number of vars, symbols, and keywords used by the compiler and run-time.

The clojure.RT static block is the lion’s-share of latency in Clojure start-up and accounts for 825ms (87.2%) of the start-up time.

Alex Miller has cited you save ~50ms (~5.5%) by eliminating the load of the server class. This benefits compilation units but, doesn’t really help start-up when the server is required.

The best place to focus optimisations is going to be on the events that happen in clojure.core which represents 620ms (65.5%). The majority of time in this module is initialising the namespaces vars. The thin technicolor dreamcoat lines are symbols, vars, and keywords being initialised.

Finally the beginning of your code execution happens all the way over at 946ms. Hello prn invocation! Everything after this point is related to my tracer and JVM shutdown and can largely be ignored.

So the remaining question is “What’s a developer to do?”. How could we optimise Clojure start-up beyond what Alex Miller has already documented?

One of the first things you’ll notice if you load the trace in chrome://tracing is that everything is a single thread. Alex has already cited more efficient execution of vars and lazy loads as an opportunity ripe for optimisation. So here are a few options that I think might provide some additional improvements;

I’ve started on some of these optimisations and plan to post a follow-up with my findings.

Special thanks to Simon Stewart and Paul Hammant for their valuable input to this article.